In Texas’s Capital, Construction on Many Corners 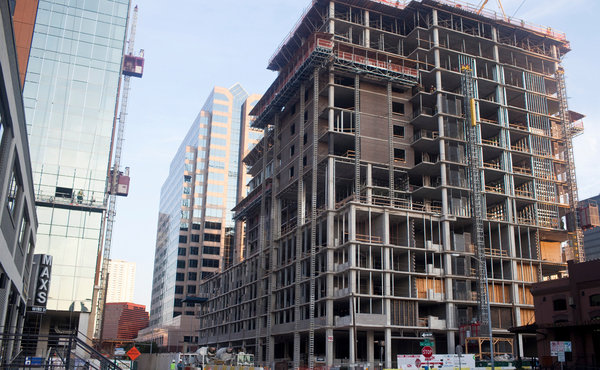 Third and Brazos, a 277-unit apartment project, is part of the increase in residential and commercial development in Austin, Tex.

AUSTIN, Tex. — Amit Sudharshan, 28, dons shorts and flip flops to walk the two blocks from his downtown apartment here to his job as a quantitative researcher at RGM Advisors.

The high-frequency trading company based here shares a floor of the Chase Bank Tower with the more conservatively dressed workers at the offices of United States Senator John Cornyn.

Mr. Sudharshan and his wife, Megan Guse Sudharshan, are among the wave of young residents who have embraced a fledgling urban lifestyle in Texas’s capital, where Cirrus Logic recently constructed a new downtown headquarters and Facebook, Google and other high-tech employers have set up shop alongside the lobbyists, lawyers and professional service providers who have traditionally filled office space in the central business district.

The combination of a diversifying business center and Austin’s renowned entertainment scene has recently drawn an influx of young and highly educated workers downtown.

“What’s happened in downtown over the past seven years is that the office space was here, the housing came, and retail is arriving last to the scene,” said Mike Kennedy, president and chief executive of a local real estate firm, Commercial Texas.

Downtown residences are relatively new to Austin. Rental apartment construction started in the late 1990s, with residential condominium development following in the early 2000s. The recession curbed condo sales and is now ushering in this latest round of rental development.

The city’s central business district has about 1,500 residential condominium units and 1,500 rental apartments, according to Capitol Market Research, a real estate consulting firm here. Downtown living has proved remarkably popular, with a rental occupancy rate of almost 97 percent, nearly equal to the citywide rate of 97.8 percent, according to Capitol Market Research.

“Living downtown is great,” said Mr. Sudharshan. “We’ve gone months without driving anywhere except to go to the airport.”

Landlords are raking in profits: The citywide average monthly apartment rental rate of $1.10 a square foot is the highest in the state, and downtown apartment rents are more than twice the city average, according to Charles H. Heimsath, president of Capitol Market Research.

“Downtown has developed such a charisma that people just really want to be downtown and are willing to pay, particularly young people in the 25-34 age group,” Mr. Heimsath said.

Lenders are still cautious about condominiums, but have backed several hundred rental apartment units now under construction. Riverside Resources, a developer here, is midway through construction of Third and Brazos, a 277-unit apartment project just a block east of Congress Avenue, which runs north-south through the center of downtown.

Gables Residential is digging the foundation for Gables Park Plaza II, which is planned as a 222-unit, 18-story apartment building eight blocks west of Congress and overlooking Lady Bird Lake, a center of activity for runners and boaters.

Several other developers are prepared to begin multifamily construction in the heart of downtown, which is bound by the lake on its southern edge and the Capitol building to the north. Its general boundary on the east is Interstate 35 and on the west is MoPac Boulevard.

Hotel development is heating up as well. White Lodging Services, a corporation in Indiana, is building a 1,012-room JW Marriott convention hotel, scheduled to open in 2015. Closer to the Austin Convention Center, Manchester Texas Financial Group plans to break ground next year on a 1,000-room Fairmont Austin hotel. The 300-room Hyatt Place Hotel is under construction one block west of the convention center.

Annual events like the Austin City Limits music festival and South by Southwest, the popular music, film and interactive gathering, can bring 200,000 to 300,000 visitors to the metropolitan area at a time, far more than will fit in the city’s 30,000 hotel rooms. The central business district has about 6,000 hotel rooms and desperately needs the more than 2,000 rooms now in the pipeline, said Steve Alberts, communications manager at the Austin Convention and Visitors Bureau. “For a long time, there has been a strong demand for more hotel rooms,” he said.

Hotel demand shows that downtown is a popular destination for visitors as well as residents, said a local economist, Angelos Angelou. “Austin’s downtown is unique in the sense that the nighttime population that visits downtown is larger probably than the number of people working downtown,” said Mr. Angelou, the founder and chief executive of AngelouEconomics, an economic development and site-selection consulting firm.”

The West Sixth Street entertainment district has emerged organically in the last decade on the western edge of downtown, near the Whole Foods world headquarters and flagship store. Some bars and restaurants in this submarket generate $700 to $1,000 a square foot in annual sales, according to Nate Paul, president and chief executive at World Class Capital Group here.

“Those numbers are similar to what you see in some of the biggest markets in the nation,” said Mr. Paul, whose company recently bought several Austin properties including the former Katz’s Deli building at 618 West Sixth Street. “Austin is the most desirable city in the fastest growing state in the nation,” Mr. Paul said. “Demand is outpacing supply for nearly every asset type downtown.”

Office buildings will soon join the party. Endeavor Real Estate Group, based here, plans to develop the 195,000-square-foot IBC Bank Plaza at 500 West Fifth Street. Cousins Properties, based in Atlanta, is planning a larger project, the 390,000-square-foot Third and Colorado, a few blocks away.

Both office buildings could begin construction this year, the developers say, and both are geared to a new type of tenant: high-tech employers. Tech workers are more likely to live downtown and require less space for parking. Office finishes tend to be bare floors and to have more collaboration space, shareable workstations and bright color palettes rather than the conservative oak and marble finishes and corner offices favored by law firms.

It’s not surprising that Facebook chose 300 West Sixth Street for its 60,000-square-foot Austin office, said Mr. Kennedy, the real estate broker. Built in 2002, the building was a good fit for the first Facebook office outside the company’s headquarters in Palo Alto, Calif.

With occupancy at 88 percent in the highest quality office buildings, Mr. Kennedy said he believed Austin would lose high-tech employers to other markets if it didn’t introduce more new downtown office buildings soon.

Robert Hess, an executive managing director in the consulting division of Newmark Grubb Knight Frank, has seen Austin rise to prominence on many employers’ lists of preferred cities for relocation and expansion over the last 25 years. The airport lacks frequent flights from major cities, he said, and the area’s public schools could stand improvement. But the city offers great advantages to companies concerned with attracting top talent.

“Austin is an exciting city, a very dynamic, progressive city,” Mr. Hess said. “A lot of our clients right now are interested in urban developments, and they want to know, have these communities taken care of their downtowns? And Austin has.”

A version of this article appeared in print on August 15, 2012, on page B6 of the New York edition with the headline: In Texas’s Capital, Construction on Many Corners.

Previous Post: « Downtown’s skyline poised for a remake
Next Post: We know how fabulous Downtown Austin is to live in! Which building would you like to live in? »